Too Far, Too Fast?

Boundaries tend to be pretty loose in theater. It's arguably one of the few industries where you can meet someone for the first time (who might be the same sex or the opposite sex) and then be in the middle of a scene, kissing them five minutes later. It's also one of the few places where you could be in your underwear on your first day of work. These things aren't part of the typical job description. 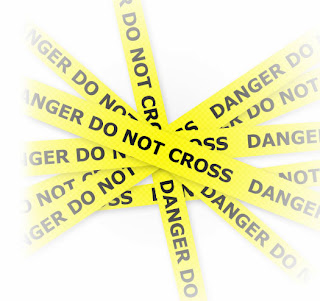 That being said everyone has their line in the sand and/or the speed at which they feel safe driving. And both of those limits should be respected. There have been times when I've been a reader for auditions and had actors I've just met touch my face or my leg during their audition. For me, that's further and faster than I'm comfortable with. If, however, any of those actors had asked me right off the bat "is it okay if I touch you" I would have been completely fine with it. My boundaries with regard to that are related to the fact that it's within the context of an audition and I'm a reader, not your scene partner. When you touch me without asking, it makes me think "oh God, what other off the wall thing is this person going to do?" In that scenario, touching me without asking is too far. When I'm in rehearsal, my boundaries are different - I don't think twice about someone doing that. But if you don't ask, you won't know what someone's comfort level is.
The conversation can be had at multiple points of entry.

- My favorite option is for the director to voice how fast and how far they would like things to go and confirms with the actors that's they're all okay with that. As an actor, this option makes me feel like someone is looking out for me and wants me to feel safe, which makes it that much easier for me to do my job. Also, with this set up everyone starts on the same page.
- If the director doesn't clarify those things, the actor who's about to initiate potentially boundary crossing behavior, can check in and ask his/her fellow actor if they're okay with what you're about to do. This is my next favorite option. Again, it's a scenario that helps me feel safe and respected.
- Failing the other two possible points where this could have been addressed, the actor who's boundaries have been breached should feel able to say this is too far/too fast for me. I find this option to be the most difficult. Because the boundaries are often so lax in theater, it can be hard to say this is too fast for me without feeling like a stick in the mud. However, you are the only one who can speak up for yourself. If no one knows you're uncomfortable, they can't take steps to help you. Additionally, if there's something in the script that you are particularly worried about, you may just want to do preemptive strike and talk to the director about it before rehearsals begin.

I will grant you, it's super easy to NOT have this conversation. Doing nothing is always easier than doing something, but beyond that it's easy to assume that our boundaries are pretty normal and that everyone else probably has boundaries that are close enough to our own that it won't be a problem. (This is what I like to call "I'm sure it will be fine" syndrome.) It's the same thing that happens when you move in with a new roommate. Most of us (myself included) decide we don't need to have the conversation about when the garbage should be taken out or how many dishes should be allowed to pile up in the sink. And then we spend the duration of our co-habitation kicking ourselves when it turns out that our normal isn't as close to someone else's normal as we thought.

So, instead, why not just bite the bullet? In all likelihood, this discussion can be had in less than 5 minutes. "Hey, I'm assuming you guys are okay with jumping to kissing and touching once we are start blocking this scene. Please let me know if that's not the case." Or "I'm planning to block this scene first and make sure everyone knows what's going on with it. Then we can start figuring out when articles of clothing need to come off." When in doubt, give your actors a place where they feel comfortable.

Thoughts? Questions? Comments? Post them below. The more the merrier.
Posted by Cotton Wright at 10:43 AM

Email ThisBlogThis!Share to TwitterShare to FacebookShare to Pinterest
Labels: boundaries, Cotton Wright, Direct And To The Point