This post is inspired by Roundabout's recent production of Talley's Folly. A reminder that these show specific posts are not necessarily meant to be a review in the traditional sense. Rather, they are meant to speak to what I think the key elements needed to make that piece really hum - a perspective that I think is much easier to attain when you're just sitting in the audience. So, here we go...

This might possibly be my most favorite play. Ever. The humor, the ferociousness, the boathouse. I love it and I can't wait to work on it one day. These are my thoughts...

- Sweet Tooth. This is an incredibly sweet play. And the pieces fit together perfectly. As such, I think it's important to make sure it doesn't get too sweet. I think this can be done (or helped) by allowing the salty parts to be salty. Which is to say, allow the arguments to be real arguments. These two people are stubborn and afraid, both of which are excellent qualities to build quick tempers. The arguments are the only conflict in the play. Let them rip. With in the first few pages of the script Matt says, "Sally, one of us had better go for a walk and cool off. Both of us can't be angry."...which makes more sense if one or both of them are angry at this early point in the story. Ultimately, I think the whole play is an argument. It's an argument that's happening in the right way (both parties stay engaged in the discussion, neither one stonewalls the other) and for the right reasons, but they are fighting against each other (or for each other, in Matt's case) right up until they're able to see they're actually on the same side. If this couple is really going to make it, they need to have the argument out. Plus, what's more satisfying than love that's overcome a huge obstacle? 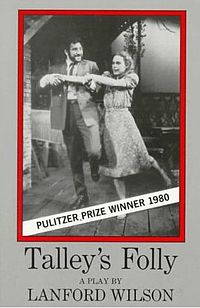 - Eggs. Matt's speech about how we are all eggs is the crux of the play. Nobody wants to be cracked. While Matt has come for the sole purpose of cracking himself open to Sally, this is not in any way easy for him. If anything it has a sort of suicidal/sacrificial feeling to it. He is terrified to expose himself in this way. This is the only thing that MIGHT win him the only girl he loves. And there is a distinct possibility that once she knows about who he is, that she will want nothing to do with him. If there were anything else he could do to win Sally - ANYTHING else - he would do that. But nothing else will do and he's driving himself bonkers with how much he loves her. Sally, on the other hand, is fighting tooth and nail to keep Matt from cracking her shell. She is certain that if he were to know her full history that he would shun her. She wants desperately to bury how much she loves Matt. It's only by burying any trace of that that she can continue living in the safety of her own shell.

- Him. Matt should be lovable, but not without darkness. He chooses to live on the side of lightness, but he has both sides. He's become a clown out of necessity. But in order to really appreciate the need behind that reflex, we have to see the mask drop. It might only happen once (in fact, it probably shouldn't happen much more than once), but it has to happen. Humor is an attempt to distract or diffuse tension. But he's got to get real (and vulnerable) at some point if he's going to get Sally to take him seriously.

- Her. Sally is a hellfire. She may have once been the golden child who would continue the family business, but I would wager that she was never a wallflower. As Matt says about her, "Boy, you get angry, you really are a mountain daughter aren't you." Additionally, by the time we meet her, she has nothing left to lose. If she wasn't already, she's become quite the rebel - getting fired from Sunday school for endorsing unionization and intentionally bringing Matt home for dinner as way of trying to show her family how narrow minded they are. She's also something of a caged animal with regard to this situation. Matt is systematically stripping away reasons she's used to keep him at bay. What she feels for him is tremendous and she violently wants not to feel it. She can avoid (she thinks) being humiliated and heartbroken if she can just fight him off.

- Pedal to the Medal. Both of these characters are super smart and seldom at a loss for words. Like a fencing match, each statement is to defend, deflect, attack or egg on the opposition. And at any point it's conceivable that Sally could walk out and leave. As such, the pace can be pretty fast. If there's a pause, it can't allow her walk out. Similarly, with Matt's Probable Lit speech, I think the pace needs to be pretty brisk. This is something that he can't linger in. If he lingers in it, he risks getting really emotional about it. Which it not the idea. I'll grant that he may have to be figuring out how he's going to say it as he's going along (since he's never voiced this out loud) but he can't slow down with it. What he wants to do is convey the information, but stay out of the experience of reliving it. And to get it over with as fast as possible. He knows Sally has a story to tell (according to Aunt Lottie). He knows he'll have to play his cards before she shows hers. He has to say "this is the whole, entire, ugly deal with me", before he can demand the whole deal from her. I think if he slows down in telling this story (or is too clear in telling it), that makes it look a little calculated. It makes it look like "I'm telling you this story because I actually already know your whole deal and we're more perfect for each other than you know - and I've known it for months - and I'm just waiting for you to get with the program." Instead of "Jesus Christ, this is a mad leap of faith and I have NO IDEA what will happen after I vomit all of this information at you."

- Details. In the first couple of pages, Matt says, "Actually, I came here to talk to your father. That's the way I've been told these things are done in the South." To which Sally responds, "You're not in the South. You're in the Midwest." And then continues
talking about the differences between the South and the Midwest. I think in order for the dialogue to continue on as scripted, Sally can't actually hear the first part of his line. She can hear "in the South" which cues her indignation at being called a Southern. But I don't think she can hear much of the rest. If she hears it, she'll know explicitly why he came. There will immediately need to be a whole other conversation. I don't think she fully knows why he's come until much later when he says that he's been meaning to talk to her about changing her name.

Posted by Cotton Wright at 2:12 PM

Email ThisBlogThis!Share to TwitterShare to FacebookShare to Pinterest
Labels: Cotton Wright, Direct And To The Point, Roundabout, Talley's Folly