This post is inspired by The Public Theater's most recent production of Cymbeline, directed by Daniel Sullivan. Previously, I had had the pleasure of seeing Fiasco Theater production of this work. These viewings make up the sum total of my background with this play.

As I understand it, this production harkened back to a previous production Mr. Sullivan and set designer Riccardo Hernandez had worked on together in 1999 at the Old Globe. It features a found space aesthetic, with locations being suggested by key pieces of furniture and seats which are visible to the audience for the actors to sit in when they are "off stage". The cast is small with most everyone doubling or tripling roles. This is a style of performance that I find to be a lot of fun as an audience member. I feel like it allows me to engage with the imaginative aspect of the storytelling and not be distracted by other design elements. It feels more like we (actors and audience alike) are all playing make believe together. You can see all the gears of the machine as it's working. (As opposed to the more typical style of theater where everything is hidden and you only see the pieces you're shown.) I wish this production had embraced this style more fully. The costumes, for example, could have been more suggested than actualized, such that that actors could add or subtract pieces on stage in order to become their different characters. Rather than having to be hidden away in a changing booth for a complete costume change. The "off stage" seats for the actors were visible, but definitely in the shadows. I would have loved for them to be plainly on display. In the prologue type scene right at the top of the play, they make use of the audience by having them speak selected lines. I wish they had found a way to work this in at some other point in the play. But, stylistic quibbles aside, these are my thoughts as they relate to the storyline... 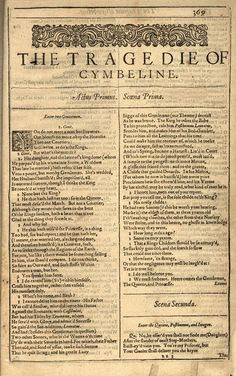 I think it's safe to say that the first scene, where Posthumus is being banished, marks the beginning of a series of events for Imogen where everything in her life gets progressively worse (until the last scene when everything is righted). As such, it's crucial for the moments where it seems like things might be improving to be as joyful as possible. I think it's also important to pace each subsequent tragedy so that the distress level is able to continue to rise with each new turn. And within that, to explore the full spectrum of emotions we feel when we're in distress, in order to keep her story from becoming one-note.

The Stupidity of Cloten.

There is lots of fun to be had in the stupidity of Cloten, and I think Hamish Linklater milked each and every opportunity. But I think Cloten's stupidity also has to contribute to his danger. It's important to believe that he would be capable of making good on his threats to rape Imogen on Posthumus' dead body, given the opportunity. It's important to believe that he is a legitimate threat to Belarius and his boys if he were left alive. Otherwise, the beading just seems cruel (and not an expression of noble, princely instincts. His danger (which builds) is that he's stupid and he's increasingly frustrated by the fact that everyone knows he's stupid. I think he needs to have a degree of physical brutishness to him, so that what he lacks in skill and intelligence he makes up for in rage and brute strength. He's a terrible fighter with regard to having any actual ability when he gets mad and goes ballistic, damage will be done.

One of the things that I thought worked exquisitely in this production was Raul Esparza's performance of Iachimo. It's easy (and boring) for Shakespeare's villains to fall into being evil for the sake of being evil. However, if you can convey some sort of reason for why they're doing what they're doing (which Shakespeare often leaves unanswered) it becomes mesmerizing. In this production, Iachimo became that guy whose gaping insecurity makes it so that he always has to win, always have to have the last word, can never let an offense go - regardless of the cost to himself or others. This driving insecurity made everything else about him make sense.

Likewise, the Queen, being another villain, needs her motive. In the production that I saw by Fiasco Theater, if felt very clear that the Queen was on a mission to get Cloten on the throne (so that she could rule the country by dictating his every move). Her distain for both Cymbeline and Imogen as obstacles on this path were palpable. In this production, that wasn't as strong and, as result, her deathbed confession seemed to come a bit out of left field. I knew that she was evil, but I didn't get a clear sense of why and exactly who she was for or against.

Pisanio with the Potion.

I assume that Pisanio, being a smart and observant servant within the court, knows that the Queen is not to be trusted. As such, it begs the question why he believes that the potion he gets from her is capable of bringing people back from the verge of death. I think the way to package this is for her command that he make Imogen give up on the idea of being with Posthumus (and her threat that he should also disavow Posthumus if he knows what's good for him) to be as menacing as possible. So that when she give him the potion immediately following that, it feels like a bribe or an act of making him complicit with her plans. Her speech to him needs to be like he's just been chosen by the most violent of street gangs and he better deliver or else. That way the potion becomes a gift worthy of the stakes and it's a shocking enough scenario that Pisanio never really stops to think about why she might have given him such a valuable thing.

Aside from the fact that Shakespeare needs the bodies to be uncovered in order for his scene to continue to play out the way that it does, it's ridiculously strange that Belarius and his boys leave the Fidele/Imogen and Cloten corpses uncovered. I don't know if there's anything that can really be done about, based on how the text is. I wonder if there's a way to imply that the Belarius crew had to leave suddenly because of the approach of Caius Lucius and his men.

The battle scenes are quick and rather chaotic, especially given that Posthumus switches from fighting for Rome to fighting for Britain in the middle of it...and then ends up being jailed by the Brits. So, whatever can be done to make all of that clearer should be done. I feel like costuming that quickly and clearly distinguishes the Romans from the Brits is a good start. I also wonder if there's a way to see Posthumus be caught with with some part of the Roman uniform on him. Like if the Romans where red capes and the corner of a red cape is seen sticking out of Posthumus's bag? That seems a bit trite, but I was completely confused about how Posthumus ended up in Cymbeline's jail. So perhaps something like that is worth it for the sake of clarity. Also, perhaps it makes sense to just cut that scene in jail? I think it's enough if we know that he's been captured by the Brits.

That final scene is a doozie with plot points wrapping up right, left and center. The thing that I really wanted from this last scene was better stage pictures. I don't mean to imply that the pictures Mr. Sullivan and his cast created were not good ones. What I do mean, is that with all of the disparate plot lines coming together so quickly, it's difficult to maintain visually what everyone's relationship is to everyone else. I don't have a solution for this, but I would definitely want to spend some time on it in rehearsal.

Thoughts? Questions? Comments? Post them below. The more the merrier.
Posted by Cotton Wright at 1:38 PM No comments: